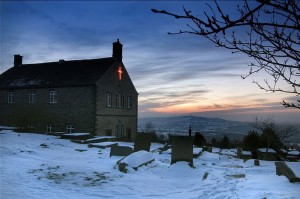 The Origins of Top Chapel

Tradition states that one autumn evening, not long after England became a Christian nation, a lone traveller was wending his way on foot across the moorland heights in the hope of reaching a town or village before full nightfall.

Suddenly, a thick impervious mist fell around him. Confused by the mist, he lost his way and strayed into the wildest and most dangerous part of the moor, where he wandered up and down desperately trying to find a path that would lead him to shelter.

As night fell, filled with dread at the peril of his situation and perishing with the cold, clinging mist, he prayed to God for protection and vowed to build a chapel for prayer and refuge on those moors – if he survived. He had scarcely finished his prayer when the mist cleared away and the moon shone – lighting the darkness. As he was thanking the Lord for this answer to his prayer, a shepherd came along driving a few sheep, and led him off the lonely moors to his master’s house, where he rested for the night. He arrived safely back in Ireland.

He returned to England a while after, bringing with him a oak-timber roof, and on the brow of those moorlands where he had wandered in fear, he had a place of prayer built in fulfilment of his vow. The place where he erected this building was near the village of Charlesworth. This is the simple worship building which preceded the Chapel of St. Mary Magdalen – now the site of Charlesworth Independent Chapel (formerly Charlesworth Congregational Church), known locally as Top Chapel.

The ancient name for Charlesworth village was “Cheveneswrde” The valley of the River Etherow below Charlesworth was first called “Ceafl” or “Ceorl” and the name of the village probably means an enclosure near Ceafl or Ceorl’s Court.

The Building of the Monk’s Chapel of St. Mary Magdalen

In the time of Edward the Confessor, the village belonged to Swen. At the time of the Domesday Survey, it was owned by the King and was part of the Royal Forest of the High Peak.

By 1139  the Wolley de Charlesworth family owned lands in Charlesworth and elsewhere in the Parish of Glossop.

Henry II gave the manor of Charlesworth to Basingwerk Abbey in Flintshire in 1157, much of which was rented out for sheep pasture.

In 1308 a member of the Wolley de Charlesworth family, Robert de Charlesworth, gave the Abbot of Basingwerk eighty acres of arable land in Charlesworth in addition to small endowments in Simmondley and Chunal.

These gifts enabled the monks of Basingwerk to establish a farm or grange managed by their own Order on their newly acquired possessions and a Chapel was also erected on the land sometime before 1291 which was dedicated to St. Mary Magdalen.

According to an old description, it was a lowly pile, with a roof of peculiar construction – formed of bent timbers resting on the floor on crucks and meeting at the top in a pointed arch. This roof, according to tradition, was of Irish oak and neither spiders nor any kind of vermin were ever found near it.

This Chapel was reputed to have been on the site of the original place of worship established by the Irish traveller lost on the moors in fulfilment of the vow made when his prayer for safe refuge was answered.

The memory of the monks of Basingwerk is preserved in Charlesworth in several ways. The road on which Top Chapel is situated is called Monk’s Road. This thoroughfare was their road from their abbey in Wales to their manor of Glossop and in a corner of this road is an ancient square block of stone, curiously scooped out at the top and bottom, like a rude seat or chair, known as ‘The  Abbot’s Chair’, probably because, after the grant of Chunal to the abbey in 1336, it was placed as the boundary-mark of the abbey lands. It is said that the Abbot of Basingwerk used to hold open-air court for the manor of Glossop at this point. 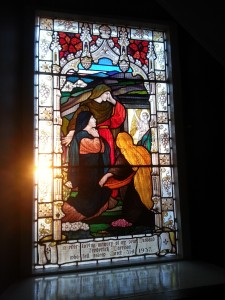 The Abbey of Basingwerk was dissolved by Henry VIII as part of the Act of Reformation and its lands given to the Talbot family, who had already leased much of them for around a hundred years. The Talbot family was the most successful northern family in Tudor England. In 1606 the land owned by the Talbots passed to the Howard family when Alathea Talbot married Thomas Howard, Earl of Arundel. The Howards remained Lords of the Manor until 1925.

During the Civil War, the Chapel was recorded as a Presbyterian Chapel. At the Restoration, Charles II passed the Act of Uniformity which led to Anglicanism being re-established in all of Derbyshire, with the exception of Charlesworth however, where the Howard family, as patrons, allowed the Chapel to remain in Presbyterian hands, making it the only Anglican Church not reclaimed after the Interregnum.

A Presbyterian congregation clearly continued to exist in the late 17th century, the remnant of that ministered to by John Jones, St Mary Magdalen’s curate in the 1640s, who later became a non-conformist preacher in Marple.

William Bagshaw, a non-Conformist, who was ejected as vicar from the Anglican Church at Glossop, continued to preach in secret at various places and chapels across Derbyshire, including Charlesworth.  In response to his influence, the members of St Mary Magdalen’s at Charlesworth formerly began to worship as a Congregational Chapel in 1652. Bagshaw’s ministry covered a large area and he became known as the Apostle of the Peak. 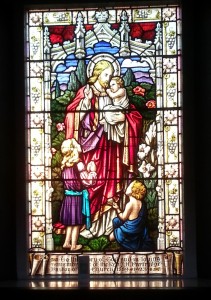 In 1703 a new Chapel building was erected on the site of the Monk’s Chapel and registered under the 1689 Act of Toleration for Dissenters. A certificate was issued in 1709 for a ‘meeting house of protestant dissenters in Glossop Dale called Charlesworth Chapel’ and in 1716 it is recorded that Mr. John Bennet left the interest of £20 for the benefit of the Presbyterian minister at Charlesworth.

Twenty years later, the Independents took over the Chapel. They rebuilt it in its current form in 1797 – apart from a later extension to the rear built by the Victorians.

By 1815 Charlesworth had five mills for cotton spinning. Most were small in area, but three or more storeys high. At this time, the grocer, John Bradbury, obtained a licence to run a public house at numbers 44 – 46 Town Lane and called his pub the ‘Cradle and Coffin’. An underground passage ran from these premises to the Independent Chapel graveyard on Monks Road. This passage has now collapsed.

Many of these folk worshipped in Top Chapel and during this time, the Chapel building was extended to the rear and the interior of the building was altered and embellished.

The Foundation of the School in Town Lane 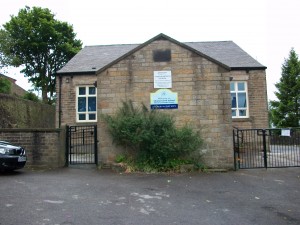 The Independent Congregational Chapel also built a school on Town Lane in 1823 for 256 children, under the Rev. John Adamson. Before this, the Rev. William Marsh had established a day school in a cottage close to the Manse on Back Lane. The school building was extended in 1845 and again in 1894. It had become known as the Charlesworth British School by 1863 and as the County Primary School by 1900.

During the first half of the 20th Century on Whit Saturdays all the schoolchildren in Charlesworth and Chisworth walked in procession with their Sunday School banner, led by a band. The three denominations represented in the village met in the centre of Charlesworth where a short service was held before the children walked back to their respective schools for refreshments.

Today, the school founded by Top Chapel and the school founded by St. John’s Anglican Church on Long Lane, are united as Charlesworth Primary School. The two Churches retain ownership of their respective buildings and influence the functioning and Christian ethos of the school through their right to appoint Foundation Governors.

A comprehensive history of the Chapel (prior to 1894) was written by T.J. Hosken in ‘Memorials of Charlesworth’